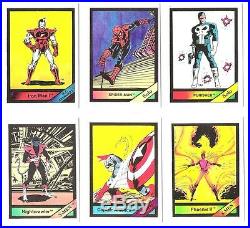 1987 MARVEL UNIVERSE Comic Images Complete 90 card set In binder and pages. These were considered the Marvel Universe series and consisted of: 1987 Marvel Universe (Series I) 1987 Colossal Conflicts (Series II) 1988 Wolverine Trivia (Series III) 1988 Heroic Origins (Series IV) This is the 1987 MARVEL UNIVERSE – Series 1 complete set (90). These card sets were relatively small (90 cards for this one) and this set had a very small production run relative to the others. Due to their scarcity and vivid illustrations, these sets are very much sought after by collectors. This set is considered the one that started the Marvel card collecting craze and illustrations are of the popular Marvel heroes and villains. The backs of the cards list the following for each character: Real Name, Occupation, Legal Status, Identity, Former Aliases, Place of Birth, Marital Status, Known Relatives, Group Affiliation, Base of Operations, First Appearance, and Origin. 6 of the 90 cards in the set are shown in the picture. The item “1987 Comic Images MARVEL UNIVERSE 1 I Complete 90 card set in binder and pages” is in sale since Tuesday, April 2, 2019. This item is in the category “Collectibles\Non-Sport Trading Cards\Complete Trading Card Sets”. The seller is “stuff_from_bob_and_betty” and is located in North Andover, Massachusetts. This item can be shipped worldwide.